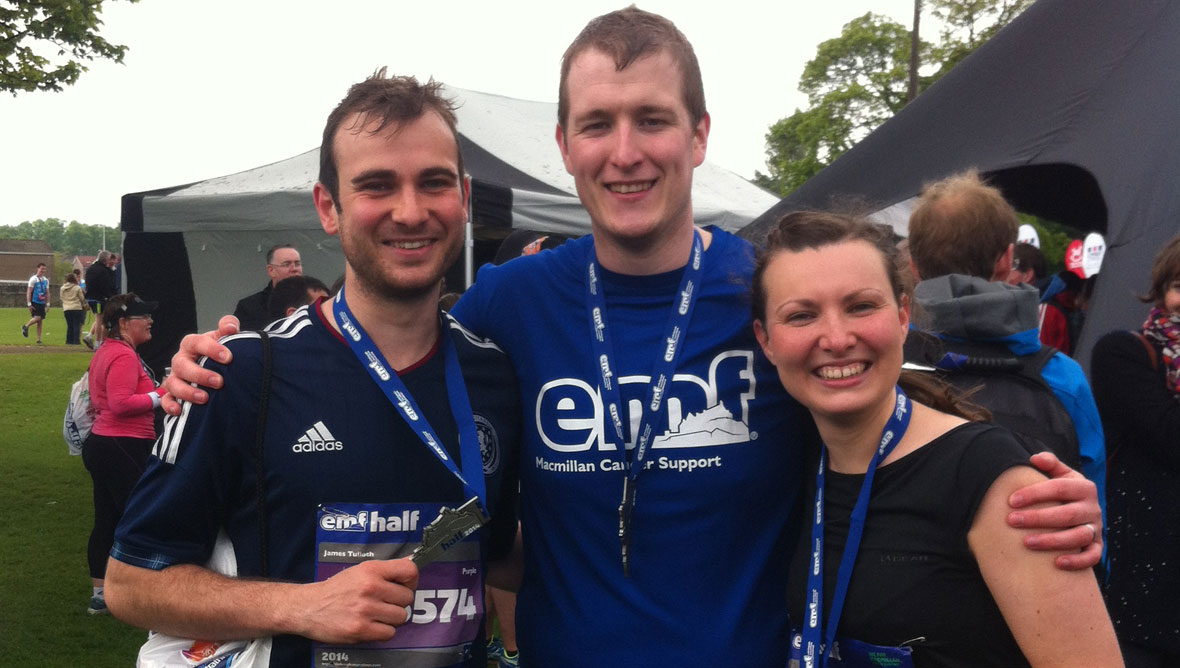 NNT in the news: A racing mind as the two-day muscle ache sets in

They say that muscle ache is always worse on the second day.

Knowing this, I sensed it probably wasn’t a good sign when my legs began to hurt a mere hour after completing the Edinburgh Half Marathon.

But two days on, the aches don’t seem important – the magical memory of crossing that finish line is the feeling that matters most.

And this is coming from someone who picked her first ever pair of running trainers earlier this year because they were purple and, well, that’s my favourite colour.

A sea of colour on Regent Road

As we lined up ahead of the 8am start, Regent Road was a visual feast. Runners wearing brightly coloured T-shirts with charity messages and heartfelt pleas lined the streets, chatting nervously.

Wearing my running shorts and short-sleeved top, I watched in envy as spectators with umbrellas or makeshift bin bag jackets sheltered from the rain which was already bouncing off the pavements.

They have been here before, I realised.

The route was lined with cheering supporters. People were hanging out of their windows and offering the runners an encouraging word with their morning cuppa in hand – there was even a young boy who got a bit excited by it all and starting running alongside us.

As we reached Portobello promenade, we spotted our friends and Nansato Nursery Trust founders Stuart and Paula Glegg. This was the second day they had shown their support to the runners, after cheering on the youngest member of our team, seven-year-old Ephram Shreve, who completed his first 1.5k.

My husband (and very patient running partner) James stayed at my pace, happily accepting every Jelly Baby and cookie offered to him by spectators along the way

Running for a reason

For me, the best thing about the race was reading all the messages on the T-shirts of the other runners. There were so many people running to raise money for their charity, and a fair few outfits that kept me smiling throughout the run – kudos to the lady dressed as a cone and the men clad from head to toe in tartan.

One of the hardest points of the race was reaching Musselburgh Racecourse and knowing there was still a four-mile loop to go before reaching the finish line. More friendly faces, my dad and friend Dawn, kept us going at this point with a cheer and a quick hug. We were back on our way!

As we approached the final stretch, we waved across the barrier to another member of team Nansato, Paul Hart, who was fast approaching the finish line.

We turned the corner and the final stretch was in sight. I was feeling as proud as punch until the elite athletes running the full marathon zoomed past us.

In awe of the speed of the elite athletes, we continued on at our own plodding pace until one of the stewards shouted that we had a third of a mile to go. Hooray!.

One or two corners later and the finish line was in sight. Oblivious to the cameras snapping away (it’s safe to say I won’t be buying my photo) I crossed the finish line in two hours and 39 minutes, with a rather scary expression on my face. And then the tears arrived.

So, yes, two days on, my legs are feeling a tad tender but I take comfort in the fact that between the four members of team Nansato, we have raised over £2000, the equivalent of 40,000 bowls of porridge which will feed all the children at the four nurseries of Nansato Nursery Trust for the whole year.